With more than 6,000 years’ worth of creative treasures, the Getty is one of the best places for art on the west coast of the US. Go from neolithic clay figures to Van Gogh’s Irises and Renoir’s La Promenade – just two of many artworks that feature in the virtual tour.

Google Arts and Culture offers a “museum view” tool to look inside gallery spaces, with clickable artworks presenting further information. The Getty’s sunny sculpture plaza and garden terrace are worth adding to your digital trip, via another viewing platform, Xplorit.

Ode To The Singing Butler

The Ode to the Singing Butler brings the characters of Jack Vettriano’s iconic painting, ”The Singing Butler” to life. With an award-winning original score by Jack Weinstein, the film explores the moments before the man and the woman find themselves waltzing on the beach.

Watch The Ode To The Singing Butler

Artist Of The Week by We Love Art

The best part of WLA is watching our ArtLovers unleash their inner artists and leave us speechless. So it is time to show off what our community is creating all around the world.

Our Artist of The Week is Tasnim Saleh! We are very proud to say that she is an Art lover who has painted almost 25 masterpieces from us! Isn’t that incredible?

We love how far Tasnim has come with her artistic journey, and look forward to keep seeing the brilliant masterpieces she creates.

The We Love Art Experience has been a breath of fresh air in my life. I was first introduced to it in 2018 and have since painted almost 25 masterpieces of famous artists from Monet to Klimt. We Love Art is the best idea and is truly a premium experience. I have done both the level 1 and level 2 courses and the experience has been phenomenal. Painting with We Love Art helped me to improve my technique and made me fall in love with painting all over again. I am so happy to have met Denise and thankful for her bringing art into my life again. – Tasnim Saleh

“Every artist was first an amateur” – Ralph Waldo Emerson

The Quiet Sunset is an oil-on-canvas painting made by Leonid Afremov. One of the most distinguished contemporary artists of our era, Afremov is known for his unusual painting manner, the Impasto technique. By laying oil paint in thick overlapping strokes, he creates a layered texture that gives his paintings a distinct three-dimensional sense. Creative, cheerful, and dreamy like himself, Quiet Sunset conveys a strong positive message filling your heart with peace, harmony, and delight.
PAINT THIS PIECE NOW

Our ArtLovers tell us that Paint & Grape sessions are the ‘highlight of their week’.

We absolutely love the stunning artwork created by our Artlovers for ‘Audrey Hepburn’ by Denise Schmitz at Chival Citywalk.  Watch the still for this event on our YouTube Channel below!

After years of our community asking us for a We Love Art for kids, we have finally launched our sister brand Kidz Love Art. Our Last Paint & Grow event on the 12th of March was a huge success! The children painted some amazing masterpieces and we are absolutely proud of them! Explore our next Paint & Grow on the 26th of March and enroll your child for the most creative experience. 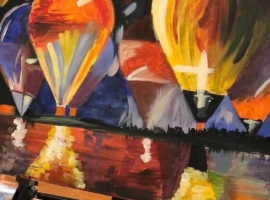 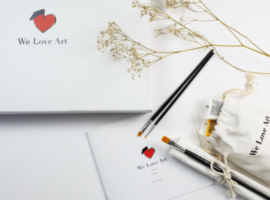 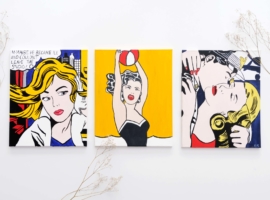